I was standing at the bathroom sink when I saw it. Glancing up at the corner where the shower meets the ceiling, there it was. It crouched, dark, menacing, a creature of chaos and terror. And then it looked at me with its horrid, googly eyes. 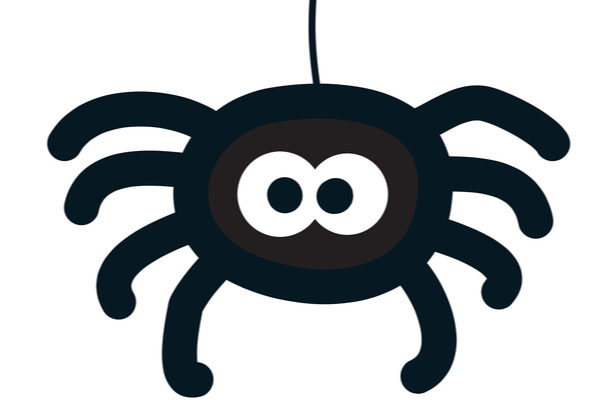 Which is when I called for backup. “Please!” I shouted in the direction of the bedroom where Mr. Schrock was catching the news. “It’s a spider. It looks like the kind that could jump in your hair.” Surely it wasn’t a snort and a snicker I heard drifting to me from his pillow. Surely not. I angled my best ear that direction. Nothing more. Then, here he came.

“Yup. That’s a jumper,” he said, assessing the threat. And moving into male mode, he took care of business.

It wasn’t a good day to be a spider; in particular, a brown one with Olympian Bob Beamon’s long jump abilities whose fatal mistake was eying my hair.

Frankly, it’s a bad time to be a yellow jacket, too. Recently, we’ve had an alarming home invasion by these striped intruders, and it’s driving The Mister to distraction. “I can’t figure out where they’re coming in,” he growled. I could tell by the way he stalked the dining room that he was in crusher mode.

“I will hunt you, I will find you, and when I do, I will flatten your stinging rear end into a pancake.” That’s what his body language said. And that’s what the rolled-up newspaper clutched in a meaty right hand said as well. No, it’s not a good time to be a stinging, biting insect here on The Three.

Out at the barn, they’ve been busy. An enormous nest has appeared, one so large and angry looking that the Schrock mowers give it a respectful berth (and an extra burst of speed) when approaching.

I know what will happen. One of these days, he will have had it up to here with jumping out of his skin every time something buzzes in his ear or tickles his neck, and wham. When it comes to winged things with hot pokers in their bottoms, he doesn’t believe in misting. His M.O. is death by drowning. In Raid.

On the upside, it’s a great time to be a gap-toothed boy. Thanks to Little, we’ve seen more loose and falling-out teeth here than the Long Branch Saloon in Dodge City ever saw.

He lost a good one last week. Up on top to the left, it hung by a thread. Sturdy little incisor that it was, it had helped him through countless chicken nuggets, crunchy tacos and cheese pizza. Then, in a good-natured dustup with his dad, it fell out.

That night, the tooth was carefully tucked beneath a pillow by a young, hopeful paw. Where it was found sans cash the next morning. “Why didn’t she come?” he asked, shooting an arrow straight at my—uh, her chest.

“Maybe her schedule was full already,” I offered. “Just leave it there. I’ll bet she’ll make time on her rounds tonight.”

The next morning at the coffee house, the cheetah phone rang. It was him. “The tooth fairy left me two dollars,” he said. “Why did she give me two instead of one?”

“She probably felt bad,” I said, squirming in my flip-flops, “so she left an extra one.”

Apparently, the whole thing got him thinking. For that night as his dad tucked him into bed, he put it to him straight. “Is the tooth fairy real?”

“Nope.” His dad isn’t known for his subtlety.

“The bogeyman.” His dad is known for his teasing.

“Nuh-uh,” he said. “He’s not real either ‘cause that would be breaking and entering.”

Sigh. So the tooth fairy’s busted. The bogeyman is, too. And somewhere, a chubby guy in a red suit is trembling. He knows he’s next.

Yes, questions abound from the kid in the crisp, funky jeans. His inquiring mind’s been busy, and he’s moved on, now, to the painter.

We were watching the tradesman gather his tools and drop cloths the other day. “He’s a nice man,” I said to the Cheerful Cricket. “In fact, he’s a pastor.” And like that, he cut to the bottom line. “Does he know God?” This penetrating question was followed by another, “Does he pray?”

For any church committees who are presently interviewing candidates, I offer Little. Who, in his childlike faith, knows for sure where the bottom line is at and that even pastors—especially pastors—should know it, too.

Perhaps, as I think on it, our SPF (Small Person of Faith) should be interviewing more than potential pastors. With the upcoming elections, there’s a whole crop of politicians that could use a thorough vetting. If they can face a panel of seven- and eight-year-olds who know that fibbing’s bad, that honesty’s good, that there is a God and they are not Him, then let ‘em run.